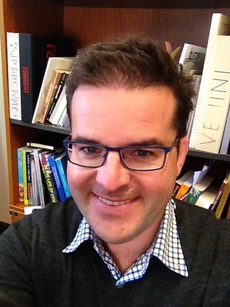 Andrew completed a Bachelor of Arts with first class Honours, and in 2001 graduated with a Master of Arts by research in the faculty of Art and Design at Monash University, Melbourne. He lives and works in Sydney and is currently Senior Lecturer and Associate Dean of Learning and Teaching at Sydney College of the Arts, a faculty of the University of Sydney, Australia.

Lavery’s early research and creative works focused on the aesthetics of stylistic periods in design such as the Wiener Werkstatte, Modernism and The International Style. Some of the tenets and attributes of these movements and periods were applied selectively to create contemporary, non-functional, transparent blown glass object groupings. Viewed at eye level, a distinct outline was formed in the negative space around the vessels. The resultant visual effect was a futuristic scene or skyline on the horizon.

His focus then shifted to the relationship between forms and sound. This work explored the ability the glass vessel groupings to mimic the phonetic sound of words and language.  Viewed at eye level, the defined outlines and transparency of the blown glass forms create a pattern of positive and negative shapes – distinctly sharp (Kiki, Kakete, Takete) or rounded (Bouba), similar to the inflections of sound when the title is read aloud.

Andrew’s current body of work explores Australian urban culture through an interrogation of everyday urban scenes and objects. The intentions of these works are varied, with some drawing attention to the role of memory in our perception of popular urban objects whilst other themes poke fun at idealism and popular culture in Australia. This is achieved through abstracting existing/readymade glass forms or by presenting an object in glass that is normally constructed from another, thus altering one’s perception of the object and the order in which the viewer assigns meaning to it.

Funding bodies, curators and institutions have recognised Andrew's work through acquisitions for public and private collections such as: Art Bank, The National Art Glass Collection, Wagga Wagga Regional Gallery and Coca-Cola Amatil. Andrew has received a number of significant awards including two Australia Council for the Arts grants and a scholarship to participate in a class at Pilchuck Glass School, Washington, USA. His work has been included in several books and numerous publications nationally and internationally.

Andrew is an active contributor to the discipline who regularly collaborates with artists and designers, recently producing a number of glass objects for Janet Laurence for her work Cellular Gardens, a work commissioned by the MCA. His leadership has been recognised through invitations to demonstrate, adjudicate/judge, lecture and exhibit at national exhibitions, conferences and universities.